1. An FPGA-based development platform for SSD

- Designed as an open framework for designing, implementing, and evaluating HW/SW components for SSDs

- Built on top of the Xilinx XUPV2P FPGA board and the custom flash storage daughter board which holds up to 8 packages and up to 16 chip-enables.

- Populated with 32 1GB MLC flash parts, each with a single chip enable.

- PowerPC 405 on the XUP board runs the Linux 2.6.25.3 kernel that is used as a platform for firmware such as a flash translation layer. 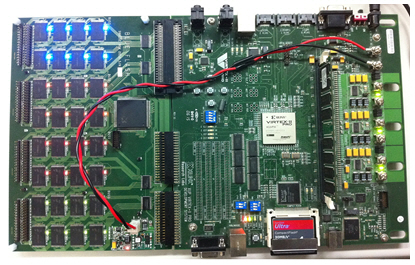 - Provide a flexible software infrastructure so that several flash management schemes can be employed with minimal modifications to the existing software system.

- Overall structure of the flash firmware, which is composed of 3 layers: a device driver for the flash controller, a host interface, and a flash translation layer. 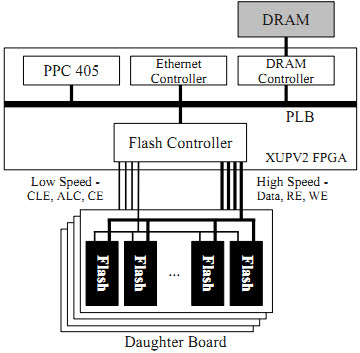 Sungjin Lee, Jisung Park, and Jihong Kim, "FlashBench: A Workbench for a Rapid Development of Flash-Based Storage Devices," To be presented at International Symposium on Rapid System Prototyping (RSP'12) in conjunction with ESWEEK 2012, Tampere, Finland, October 11-12, 2012